Nice Piece in The Fermanagh Herald this week! Can you help identify who the people are... 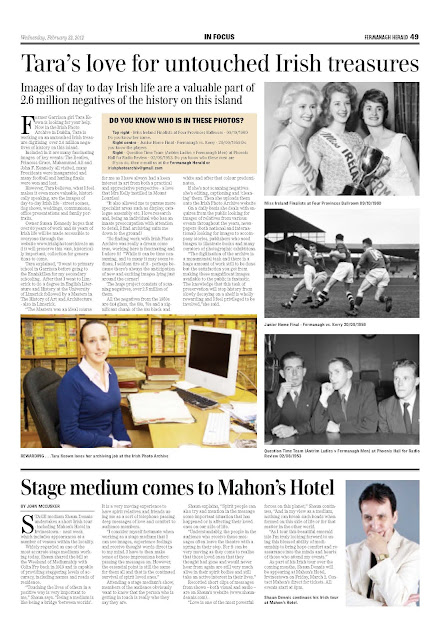 Optimism in the Sixties | Irish Examiner

Optimism in the Sixties | Irish Examiner


Optimism in the Sixties

By Jo Kerrigan
The decade that saw Ireland relax after years of austerity is celebrated in a new book of photographs, writes Jo Kerrigan
WE might all know the catchphrase: "If you can remember the 1960s — you weren’t there." But it really only applies to American youth, the generation which saw the development of hippy culture, the proliferation of hallucinogenic drugs, the Summer of Love in San Francisco, and the embracing of a culture which lived by the mantra, "Turn on, tune in, drop out."


In Ireland we experienced a very different decade, and it would be accurate to say of this country that if you can remember the Sixties, then you’re probably regarding the current economic downturn with a cynical eye. For we were only emerging slowly from post-war stringencies at the beginning of that period, starting to forget about scrimping and saving, relaxing a bit and looking with wonder on the new developments, new products, new temptations that were starting to make themselves known in what was still a fairly rural land.


The 1960s: Ireland in Pictures, published by O’Brien Press, is a selection of vivid images of everyday life and special events, personal moments and public experiences, taken throughout that decade by the Lensmen photographic agency. Set up by Andrew Farren and Pádraig MacBrian back in 1952, by the early 1960s Lensmen had expanded substantially, and had become the agency for all major Irish government departments as well as working for PR companies and commercial businesses. Employing five photographers, they supplied newspapers across the country and beyond, especially for events of international interest. Entertainingly, they were retained by certain English tabloids to provide more suitable Irish-themed pictures for their Page 3 slot, in place of the well-upholstered young ladies who graced British editions.


Mary Webb, who edited the book for O’Brien Press, says that the archive built up by Farren and MacBrian (both still hale and hearty and enjoying retirement) was a positive treasure trove. "Every image, every photographic shoot was meticulously recorded alphabetically, and they even cross-referenced. If you had Bridie Gallagher leaving on an Aer Lingus plane, it would be noted both under Gallagher and under Aer Lingus."


Once she’d made the preliminary selection, the research began. "All the images had captions, but in many cases these weren’t detailed enough. Bridie Gallagher, for example — older people would know immediately who she was, and would probably start singing The Boys of the County Armagh, but a later generation wouldn’t, so you had to add in that information."


And then there was the picture of the Beatles arriving at Dublin airport for their one and only Irish gig — but who was that striking a dramatic pose beside the Fab Four? It turned out to be Paul Russell, who hosted the Showband Show.


Another image of Irish army cadets standing to attention led to the discovery that Jackie Kennedy had specifically asked for them to act as guard of honour at JFK’s funeral. Everyone knows Ronnie Delaney, but who were the two runners flanking him on a sunny July day in 1961? "I was able to ring Ronnie up, and he immediately identified them as Peter Snell of New Zealand and George Kerr of Jamaica. He was even able to tell me the time each of them made that day at Santry!"


A photograph showing a demonstration of the new confection, Dream Topping, was included for nostalgic value, but Webb was delighted to discover that a young Gay Byrne was also in the picture — looking characteristically unbelieving as the demonstrator showed how easy it was to prepare. "It was serendipity really, finding all these additional details within one picture."


There are still maddening missing details, though. "The first broadcast of Teilifís Éireann, for example, in 1961. Archbishop McQuaid is there, but we simply couldn’t identify the other clergyman. Maybe somebody will contact us. That happened with the cover picture. A reader emailed to say it was his dad on point duty at the crossing. It’s lovely when that happens."


The book, says Webb, is both for those who remember the Sixties and those who don’t. "Younger people won’t know about the yearly draw which gave one newly-wed couple the chance to get to the top of the housing list. And in that picture, the wife is wearing a black diamond on her coat, a sign that she’d lost a member of her family recently. That’s a custom which has died out completely."


It was enormous fun putting the book together, she admits. So much so, that one on the Fifties is now being planned. "It’s good to revisit our past, to see where we’ve come from."


There are fascinating and poignant images throughout this collection, where well-known faces — Brendan Bowyer, Dickie Rock, Jimmy Savile, Gay Byrne — appear unbelievably young and carefree. Others capture moments made more poignant by today’s knowledge of history – John F Kennedy waving to crowded Dublin streets: Earl Mountbatten inspecting his new boat at Mullaghmore: Princess Grace and her children visiting the de Valeras. Then there are the landmarks in our history: the funeral of soldiers killed in the Congo, the destruction of Nelson’s Pillar on the anniversary of the Easter Rising in 1966.


But perhaps the most telling are those which show everyday life in 1960s Ireland. A grim-faced Richard Deasy, President of the National Farmers Association, addressing the protest marchers who staged a sit-down at the Department of Agriculture to draw attention to the economic plight of Irish farmers. A demonstration of the innovative Flatley dryer, with jostling housewives yearning for the freedom it offered from drudgery for just three pounds ten. Laughing children in a public park, with ne’er a Gameboy in sight.


Every page brings another reminder of times now irrevocably gone. As the decade closed, the first parking meters were being installed in Dublin, we were preparing to change over to decimal currency, and negotiating to join the EEC.


The 1960s in Ireland saw a gradual emergence from dark and hard-pressed times into a world which held new possibilities, new concepts like splashing out, enjoying life. It took time for older, more cautious folk to follow youngsters who wholeheartedly embraced the Swinging Sixties (albeit a good bit later than America or even Britain), but by the end of the decade, we had all become accustomed to a more relaxed way of living.


Yes, we have come a long way. But when you look at those pictures of our land and our lifestyle half a century ago, you see also how much we have lost.