Today is the 27th anniversary of the death of Olaf Palme, the Swedish Prime Minister who was gunned down as he walked home from a cinema with his wife in Stockholm. Swedish police are opening a hotline today in the hope of obtaining new leads that may help solve the country's most high profile political assassination.


There are cultural links between Irish and Swedish citizens and a Swedish Irish Society exists in Stockholm which organizes annual Patrick's Day festivities in the Swedish capital.

The horse burger scandal has not been all doom and gloom as two London teenagers showed when they served up a laugh at the expense of the food chain retailer Tesco, which has been at the center of media attention over the issue.

In addition to providing raw material for humorists the scandal might yet be a cloud that has a silver lining if one English publican has his way.

Russell Proctor who is landlord at The George Inn In Northamptonshire hopes to serve up burgers with a meat content as high as 100%.

We serve our own home-made burgers and the customers were joking about how much horse was in them. I said I would get some in so they could try it. I suspect some of them might pull out on the night. It is a one-off at the moment, but if it goes well, we will do it again. There’s no problem with eating horse as long as people know what they are eating.

Included on the menu are The burgers will be served from 6pm tomorrow and will be priced around £7. The varieties include a plain Red Rum, Shergar and Nijinski burgers.

Fortunately, there will be no Flash Burger. The famous Irish race horse Another Flash had long expired before ending up between two burger baps.

The resignation of Pope Benedict XVI has seemingly thrown the race for the papacy wide open.


The suggestion that the next pope might be a non-European have gathered momentum after comments by a currently serving curia cardinal.

A vast and authoritative range of candidates, who reflect the truly universal and not just European nature of the church, will present themselves at the conclave ... Therefore, the big surprise may come from faraway places such as Asia, Africa and Latin America ... this is a universal church and . . . in the end I wouldn’t be surprised if the chosen one ended up being a young cardinal, like the Filipino Luis Antonio Tagle ...


The Irish Church which has reeled in recent years over child sex abuse scandals will watch developments with interest. It is 34 years since Ireland last hosted a Papal visit.

The 2013  Sigerson Cup final will be held this afternoon at Athlone Institute of Technology.

The finalists who emerged from yesterday's semi finals are DIT and UCC. The Dublin side seized a surprise victory in yesterday's semi final over tournament favourites DCU. The other semi-final team not to make it to the decider was AIT. The Athlone side could not overcome a stronger Cork team. As Cork and Dublin go head to head in today's final clash best of luck to both. May it be a skill laden sporting event to remember.

A report by the group Caritas on the impact of the austerity programme on Ireland and in four other European countries has featured in an RTE  news item. The report called The Impact of the European Crisis was published last Thursday and has cast serious doubt on the current economic orthodoxy. According to RTE:


The first in-depth examination of the impact of austerity policies on people in the five EU countries worst affected by the economic crisis concludes that the policy of prioritising austerity is not working.

Anti-austerity marches have taken place across Europe in recent years.

Through these political austerity measures politicians are creating a structural poverty, a structural unemployment and we will have a lost generation of young people who won't find a job because they have no possibility to work and no possibility to develop their employability ... There are solutions. We need structural funds to be invested in more employment and anti-poverty measures, but also we need a better solution of the debt crisis, we need that the decisions are not simply cutback, cutback, cutback.

Lady on a Bridge

This photo, probably because of a certain haunting mystique has been our most popularly viewed Facebook page. The image is a Lensman work and was photographed on O'Connell Bridge on the 27th March 1956.

Hi All Thanks for all the positive feedback on Facebook. We have almost 30,000 people looking at our page this week. If you like the images please go to irishphotoarchive.ie where you can buy an image for any occasion or gift. We only have less than 1% digitised so far so if you want us to find a particular image please e-mail irishphotoarchive@gmail.com with as much info as you can and we will find it. All proceeds go back into the scanning and captioning process to preserve and share this great collection. Regards, Sean Walsh
at 13:33 No comments: 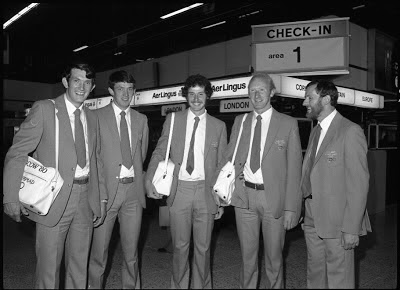 The athlete known to the sporting world as Bladerunner because of his outstanding achievements in track events despite being a double leg amputee, has appeared in a court in South africa accused of murdering his girl friend.

Oscar Pistorius was reported to have 'wept uncontrollably' as he stood in the dock on charges of having killed model Reeva Steenkamp, on Valentine's Day. Friday when a judge charged him in the killing of his girlfriend on Valentine's Day at his Pretoria home.


Last year Pistorius made history at the London Olympics when he reached the 400m sprint semi final.


A leaked version of the draft report into the death of Savita Halappanavar would seem to vindicate initial assertions by her husband Praveen about her treatment in Galway Hospital. Ms Halappanavar died in October last year after complications in her pregnancy were not addressed with the type of swift medical attention that could have saved her life. Her husband, Praveen Halappanavar, had later complained that his wife had on a number of occasions during her stay in hospital requested a termination but that this option was not made available.

Speaking on behalf of Praveen Halappanavar, his solicitor Gerard O'Donnell had this to say;

If what was published today were extracts from the report then all they do is, in some ways, vindicate what my client said from the outset as to the way his wife was treated at University Hospital Galway.


the fallout from the death of Savita Halappanavar manifested itself in people taking to the streets in Ireland demanding a change in the law pertaining to pregnancy termination.

According to the Irish Times the leaked draft report:


deals with a number of issues relating to her death, including whether her request for a termination should have been considered and whether guidelines on terminations in general are adequate. It examines the lines of responsibility of the staff providing her care as well as the follow-up that occurred where tests were carried out.

Health Minister James Reilly is withholding comment until he has received the final report.


The term 'state collusion', for long used in relation to the North's violent conflict, is now reappearing in media discourse only this time the state is the Irish rather than the British one. The Guardian, for example, ran with a headline 'Ireland finally admits state collusion in Magdalene Laundry system.'

A report by Senator Martin McAleese revealed that thousands of women and girls were enslaved in the Magdalene Laundry network which were managed throughout Ireland by religious orders. Taoiseach Enda Kenny while welcoming the report has thus far refused to apologise on behalf of the state. This prompted Claire McGetterick of the Justice For Magdalenes group to say 'frankly their country has failed them again.'

It has been reported that the senior IRA figure suspected of having planned the 1996 Adare robbery that led to the death of Garda Jerry McCabe is no longer on the force's wanted list. Garda McCabe died as he sat in his car, riddled by a hail of gunfire. His colleague Ben O'Sullivan survived the attack despite sustaining 11 bullet wounds.

The threat to on-duty Garda has moved to the centre of media discourse and political attention over the last twelve days as a result of the murder of Garda Adrian Donohoe.

Meanwhile, Sinn Fein president Gerry Adams apologised in the Dail on behalf of republicans over their role in the killing of Garda McCabe.

At a recent meeting between Tánaiste Eamonn Gilmore and founder of Microsoft, Bill Gates, on the agenda was the prioritising of development aid. During the course of the discussion time was set aside to consider the battle to eradicate polio which still poses a health problem in Pakistan, Afghanistan and Nigeria. According to Eamonn Gilmore 'Ireland is very much involved in making polio history.'

In a subsequent letter to the Irish Times, Blaise O'Hara of the Post Polio Support Group, took issue with the Tánaiste:

Polio is certainly not “history” for the 7,000 polio survivors living on this island ... Polio is not a childhood infection like the measles – it carries with it lifelong disability for those who did not make a full recovery. Of the 7,000 survivors living in Ireland, 4,000 can expect to be diagnosed with Post Polio Syndrome. PPS is a chronic neurological disorder resulting in muscle and joint pain, increased muscle weakness, extreme fatigue, breathing problems and sleep apnoea.

The investigation into the murder of Detective Garda Adrian Donohoe continues on both sides of the Irish border as An Garda Siochana continues to gather intelligence before reportedly moving against the gang involved.

Garda Donohoe was gunned down by armed raiders outside a Credit Union building in County Louth. He received a state funeral where many thousands turned out to pay their respects.


Garda Donohoe is the first member of an Garda Siochana to be shot dead while on duty since the killing of Garda Jerry McCabe in 1996. Earlier in 1986, close to where Garda Donohoe lost his life, Garda Sergeant Patrick Morrisey was 'executed' as he lay wounded on the ground following an armed raid in Ardee, County Louth. Two men convicted of that murder were sentenced to death but their sentences were commuted to life imprisonment with a minimum tariff of forty years imposed.

Many Gardai have died in shooting incidents involving people linked to political violence in the North. Noel and Marie Murray were convicted of the 1975 murder of Garda Michael Reynolds who tried to apprehend them after an armed robbery. 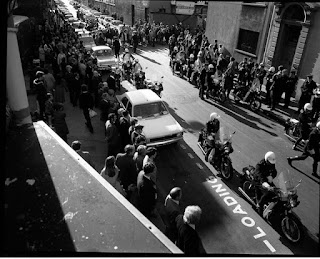