Starting Life in a Sewer Pipe

The rescue of a new born from a sewer pipe in China has ignited public interest. While it first seemed that the child had been callously abandoned by his mother, Chinese authorities have now 'decided he became trapped because of an accident.'

The woman told police she got pregnant after a brief affair with the man, hid her pregnancy from family and neighbors, and secretly delivered the child Saturday in a rental building's restroom. She said the infant accidentally slipped into the squat toilet and raised the alarm. Yet, she did not initially claim the child was hers.

He has since been released from hospital and is in the care of his mother.

Fortunately, baby 59's parlous arrival is not a universal feature.

Alan Shatter the Justice Minister is to face a vote of no confidence in the Dail. Fianna Fail had accused the Fine Gael politician of having betrayed his ministerial seal of office.

Minister Shatter is under further pressure over suggestions that a Garda report into a driving incident involving him a number of years ago had gone missing. The minister insists that no actual report was ever made.


Given the substantial government majority in the Dail the motion of no confidence is most unlikely to succeed.

Irish Justice Minister Alan Shatter has become immersed in a trough of controversy over the penalty points scandal.


It now seems that a host of political opponents are lining up to take a penalty kick at him. He is facing a welter of criticism after his disclosure of information about fellow TD Mick Wallace. Minister Shatter claimed Wallace 'had received a garda warning for using his mobile phone while driving'

Minister Shatter alleged that 'Wallace was cautioned for driving while using a mobile phone but did not receive any penalty points at the discretion of the gardaí.'

Fine Gael's coalition partner in government, the Labour Party, is showing signs of disquiet with some members calling for Minister Shatter to be more forthcoming about his comments on Deputy Wallace.

In addition to the pressure that is mounting in the Dail he is being sniped at from within his own balliwick. The General Secretary of the Association of Garda Sergeants and Inspectors, John Redmond, was critical of Minister Shatter for making privileged information public.

The impact of car bombs has once again been all too evident in Iraq where:

At least 20 people were killed by a series of car bombs in mainly Shia districts of the Iraqi capital, Baghdad ... and 11 others were killed by attacks in the southern city of Basra, police and medics said.


The device often said to have been devised and perfected by the Provisional IRA for use in the Northern conflict has been a frequent feature of the volatile and violent war that has raged throughout Iraq since the US led invasion of the country.


More than 30 people died in Dublin and Monaghan 39 years ago this month when car bombs ripped through both locations with devastating effect.

The Dictator is dead

Jorge Videla the military caudillo who fronted the Argentine coup in 1976 has died from natural causes in a prison close to Buenos Aires. He had been serving a lie sentence for the murders of 31 people and baby theft. According to USA Today:

Videla's dictatorship also stood out from others in Latin America for its policy of holding pregnant prisoners until they gave birth, and then killing the women and arranging for illegal adoptions of their babies, usually by military or police families.

Videla had previously been imprisoned for his crimes against humanity but an amnesty allowed him to go free. Public pressure and the thirst for justice, however,  ensured he was returned to prison where he would spend the remainder of his days, a pariah who had visited a persecutory plague on Argentine society with his violence.

Back on the Buses.

Many years ago one of the better British comedies was the Reg Varney centred On The Buses.

But there were few laughs emerging from the comments by Minister for Transport Leo Varadkar, who fitting the Fintan O'Toole coined term 'austerity sadist', said that he would rather see a resumption of the strike than any outcome that would not lead to the savings demanded by the company.

Despite the bellicose remark by the minister there has been a resolution of the dispute subject to approval by the union membership.  National Rail and Bus Union General Secretary Michael Faherty claimed that core pay had been protected. However, Bus Éireann will not pay its staff who took strike action.

The commuting public will welcome an end to the action due to the disruption to services which in turn had a knock on effect in terms of work schedules. The invisible cost to the economy from work disruption is at this stage difficult to estimate.

The County Louth town of Drogheda has made a few finds in its day and perhaps has been catapulted into the media for reasons it would rather not have such as arms finds during the North's long running conflict.


But in recent days there has been a find in a different field. The Boyne River has yielded from within its banks a boat. described by the Irish Times as an 'ancient log-boat, possibly thousands of years old.'


The Boyne has had a turbulent past with great great symbolic and historical significance invested in the river.


Sean Corcoran, chairperson of the Old Drogheda Society told Lensmen that the amount of stuff recovered form the river over the last few years has been phenomenal:

it also compliments what we are doing in the Old Drogheda Society, where in the course of our work we often draw attention to the importance of the river. It has great historical value and this find is most welcome.

The vessel is expected to be properly dated later this year once more detailed tests have been carried out on it.

Bus Éireann is claiming that as much as 95% of all services are disrupted as a result of strike action taken by National Bus and Rail Union.

Transport Minister Leo Varadkar has described the striking workers' action as regrettable and has urged the union to 'immediately engage with the company in talks' aimed at finding a resolution.

Bus Éireann is pursuing a cost cutting exercise of €5million on the direction of the Labour Court. Yet the strike action its policy has provoked s is estimated to lose the company €200, 000 a day.

Up to 80, 000 passengers are expected to be inconvenienced by the stoppage.

Thatcher and the Hunger Strike

The death of former British Prime minister Margaret Thatcher has once again fueled the charge laid by a growing number of former republican prisoners that senior figures in the Provisional IRA leadership prevented a resolution of the 1981 hunger strikes after four prisoners had died on their fast.


The controversy first raised its head with the 2005 publication of Blanketmen whose author Richard O'Rawe was the press officer for the hundreds of republican prisoners on protest in the H Blocks of the Maze/Long Kesh which led to the 1980 and 1981 hunger strikes.

The hunger strikes were arguably the most polarising period in the history of the North's violent political conflict. Many protests in support of the prisoners took took place in the Republic.

Luiz Suarez, the Liverpool soccer player who in last weekend's clash with London club, Chelsea, bit into an opponet's arm has been banned for 10 games.

Perhaps it is time for the fiery Uruguayan striker to consider a career move. Surely there an opportunity must  lie in the cast of The Walking Dead where biting someone doesn't get the actor expelled from the set.

This unfortunately is not one of Irish Photo Archives but we can always produce to order! 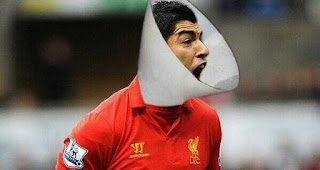 What we can do is show you one of our old photos from the days when Liverpool had less of a bite to their performances.