The Irish wildlife film-maker died last night at his home in Degeny, Co. Wicklow. Mr de Buitlear was one of Irelands first independent film-makers. From the 1960's onwards he made many documentaries about Ireland's wildlife.

He filmed and co-produced the Amuigh Faoin Speir series (Out under the Sky) with Dutch artist Gerrit Van Gelderen.  In 1986, his television programme, Cois Farraige leis an Madra Uisce, won a Jacob Award and in 1987 he was appointed by the government to the Seanad. The programmes had a major impact on the Irish publics attitudes to the environment.

He was an accomplished musician, playing the mouth organ and button accordion and authored  several books including schoolbooks on Ireland's natural history.  In November 2012, de Buitlear donated his personal archive to NUI Galway.


The recent hostage taking event in Algeria which saw amongst the kidnapped workers an Irish national from the North ended in tragedy when algerian armed forces mounted an attack on hostage-takers. According to the BBC 69 people died including 39 non Algerian nationals.

The Minister for Foreign Affairs Eamonn Gilmore had been making representations to Algerian authorities on behalf of the captured Irish citizen, Stephen McFaul who has since been released.


First of all I conveyed to him, as we have done already to his department and to the Algerian authorities, our concern for the safety of the Irish citizen who is being held captive and for whom we are working for his safe release.


Ireland has not been without hostage drama in its own troubled history. There were a spate of High profile kidnappings during the 1970s and 80s, including the most publicized, that of Dutch industrialist Dr Tiede Herrema who emerged safely from a three week ordeal and Garda siege at Monasterevin towards the close of 1975.

The Irish Army on Maneuvers in the Seventies 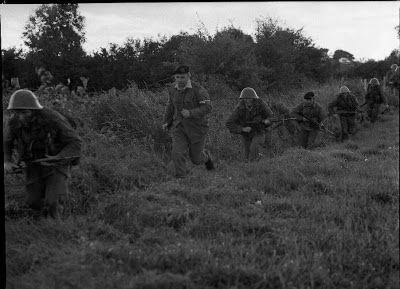 The seventies were a turbulent decade for the Irish State.  The activities of the IRA and other paramilitaries combined with criminal gangs meant an increase in bank robberies, kidnappings and trouble along the border. 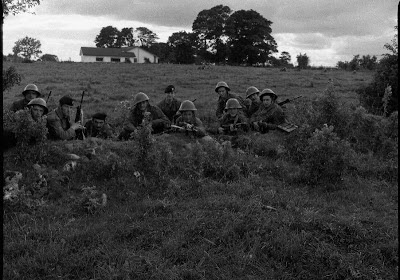 As a consequence the Irish Defence Forces had to be prepared for trouble. Therefore training and exercises were very important. The photos show members of the Army Reserve Brigade on maneuvers in counties Mayo and Sligo in September 1977. The operation was codenamed "Humbert"


Purchase prints at Irish Photo Archive
at 12:04 No comments:


Last week the European Court of Human Rights (ECHR) ruled in favor of a British Airways employee who took a case to Strasbourg claiming that she was the victim of discrimination on the grounds of her religious faith.

Nadia Eweida alleged that BA compelled her to desist from wearing a small white gold cross if it could be viewed by members of the public. The court upheld that under Article 9 of the European Convention on Human Rights Ms Eweida's rights had been breached.

Three other Christians who made similar claims had their cases rejected by the court.

The judgement will have consequences for the 'cultural war' that is ongoing between secular and religious perspectives. While Taoiseach, Bertie Ahern spoke out against what he claimed was an 'aggressive secularism'. Two years ago Dublin hosted the World Atheist Convention which signified for many the decline of religious influence in Ireland.

Religious bodies such as the Iona Institute continue to campaign in defense of Christian values.

The Irish food industry has been rocked by news that horse meat has made its way into the human food chain. According to the Irish Times 'a study by the Food Safety Authority of Ireland (FSAI) found the presence of horse DNA in more than a third of the beef burger products it tested.'
Contaminated burgers have been on sale available to unwitting consumers in Tesco, Dunnes Stores, Lidl, Aldi and Iceland.


Nevertheless the government continued to hold firm in its stance that the problem posed no threat to human health. Tanaiste Eamonn Gilmore told the Dail that people had nothing to fear. Clearly uneasy the government has moved to allay fears about the wellbeing of the Irish food industry. Agriculture Simon Coveney has blamed the contamination on imported products, while the The Taoiseach Enda Kenny insisted from Europe that 'this is very important for Ireland’s reputation ... We pride ourselves on having world class beef.'

The British Prime Minister David Cameron has ordered an investigation into the food crisis.

The food industry is a majors source of employment in Ireland and it is the governments' hope that the crisis passes quickly and that horses will once again be associated in the public mind with with matters other than burgers.

Dreamliner is something of a nightmare.

The international aviation industry has been hit by an air safety problem which has led to a number of countries temporarily withdrawing the Boeing 787 Dreamliner from service.

The carrier only came into service last October.

It followed a decision by US authorities to call a halt to fights by the flagship plane. The BBC reports that European regulators have also called for the Dreamliner to be grounded.

Boeing has maintained that the planes pose no safety hazard. Yet despite its short life span in the industry the carrier has experienced a range of faults, the most serious of which has been traced to battery malfunction.

Fifty of the state of the art models have been bought by countries including India and Japan. Ireland however does not have any in its current fleet.

A new report which describes Jimmy Savile as  "a prolific, predatory sex offender" has found that the notorious abuser could have been brought to book while alive had police and prosecutors been more diligent in their handling of complaints.   Alison Levitt QC, legal adviser to the Director of Public Prosecutions (DPP), in her report claimed that neither police nor prosecutors took the claims against Savile sufficiently seriously. Had proper procedures been in place, then in at least three cases the former BBC personality would likely have faced prosecution.


Savile who died in 2011 aged 84 has been the source of much controversy since a recent flurry of allegations have come to the surface about his predatory behaviour. According to the Irish Times


Friday's report said he had committed 214 criminal offences including 34 rapes or serious sexual assaults across the country. Of his victims, 73 per cent were under 18 and 82 per cent were female. The oldest was 47 and the youngest just 8.

The BBC has again apologised.

Dublin High Court was in recent months the site of a pioneering legal battle where the applicant if successful would have won the legal right to assisted suicide.  However, Marie Fleming yesterday lost her fight.

Totally paralysed, the 59 year old former university lecturer who suffers from multiple sclerosis had petitioned the court on the grounds that her condition was was both unbearable and incurable.


The President of the High Court, Judge Nicholas Kearns, in his judgement said; 'It would be impossible to ensure the aged, disabled, poor, unwanted, rejected would not avail of this option to avoid a sense being a burden on their families and society.'

Increasingly the courts in Britain and elsewhere are being asked to adjudicate on the question of whether the right to die should be enshined in law. A number of European societies as well as two US states allow some form of assisted suicide.

Protesting at the Dail

Last year saw many protests take place at the gates of Dáil Éireann. In the context of austerity one of the issues people took to the streets over was poverty.


Another issue that brought people to the gates of the Irish parliament, again against a background of austerity was the abominable treatment meted out to the residents of Priory Hall in North Dublin who were forced from their homes by the actions of an unscrupulous developer.


Not all protests were galvanized by austerity, however. Women marched on Dáil Éireann outraged by the treatment of Savita Halappanavar who died in a Galway hospital during a complicated pregnancy.

Protests at the seat of government are not a new phenomenon in Irish life. Our archive photo shows a protest in March 1976 by Cork shoe workers unhappy at the collapse of the industry in the city. 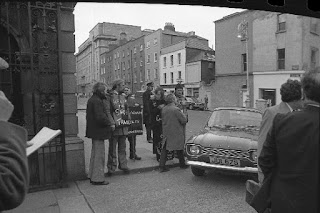 There is a curious irony about the the current flags protest in the North. Those behind them from the Protestant/Unionist/Loyalist (PUL) community who wish to see the Union flag on display every day of the year at Belfast City Hall have inadvertently hoisted the Irish tricolour over economic fortunes.


Head of the Northern Ireland Independent Retail Trade Association (NIIRTA), Glyn Roberts has claimed that that retailers south of the border have seen a significant increase in shoppers from the North who wish to do their purchasing in a climate less volatile than currently exists in the North. To make matters worse there has also been a reported decrease in the shoppers from the Republic heading north.

The North's political leader, Peter Robinson, must rue how his counterpart in the Republic, Enda Kenny, is the beneficiary of a strategy meant to enhance the Union with Britain.

Retailers in the Republic can be expected to make hay while the sun shines and will be stocking up to take advantage of the new unanticipated market. 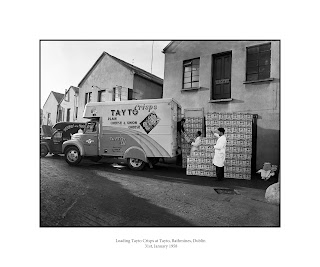 Recent attacks on the Police Service of Northern Ireland (PSNI) over the holiday period have fortunately resulted in no loss of life or in people being injured.


The attacks according to a PSNI Spokesperson, George Hamilton, were carried out by dissident republicans opposed to peace.

Republican attacks on the police in the North have a long history. Over three hundred Royal Ulster Constabulary (RUC) officers lost their lives during the conflict mostly at the hands of the Provisional IRA. But before the Provisional IRA came into existence police were also targeted by previous incarnations of the IRA.

Operation Harvest, the codename given to its border campaign which the IRA launched in December 1956 quickly saw fatalities. Limerick IRA member Sean South died on New Year's Day the following month while mounting an armed attack on a police station in Co Fermanagh. He was buried on this day in 1957.