The Howth-Sutton tram was in operation for six decades, from the first year of the twentieth century to 1959, It circled Howth hill, ferrying passengers between Howth and Sutton train stations and was a service provided by the GNR(I), the Great Northern Railways (Ireland). 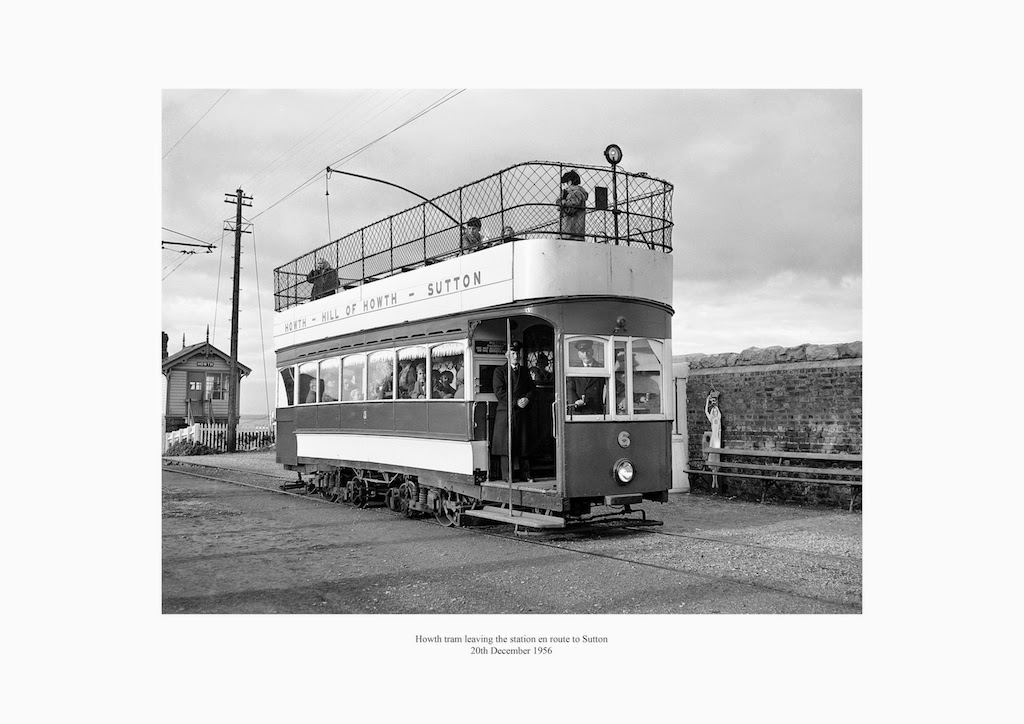 In 1958, the Northern Ireland Great Northern Railways Act ceded control of all railways south of the border to Córas Iompair Éireann (CIÉ), who closed the Howth tramline in 1959. The last run took place on 31 May of that year.

CIÉ provided a bus service to replace the tram, the 88 and the 88a. The roads were so narrow at some points that two services were necessary. Once the roads were widened, these buses were replaced by the 31/a/b buses, which still operate out there to this day. However, in bad weather, when the hill roads get very icy and slippery, the bus service is sometimes curtailed, which was never an issue for the trams.

After the tramline was closed, most of the trams were sent abroad. No 10 went to a museum in England, but No.9 was the only tram to survive vandalism and outdoor storage in Ireland. A group of enthusiasts, led by Jim Kilroy, started the Herculean task of restoring the tram, importing parts from the Netherlands or sometimes just building parts themselves.

The restored No. 9 tram is now housed at the NationalTransport Museum in Howth village. You will be able to view it before you attempt to climb Howth Head on foot, or catch one of the buses to the top.

With growing public unease at the water charges Taoiseach Enda Kenny has revealed that his Fine Gael party is divided on the question of an immediate general election.


The Coalition government has stuttered and stumbled through the water charge fiasco, with the latest Red C opinion poll putting Fine Gael considerably behind the Independents and level with Sinn Fein.

Despite sustaining widespread criticism over allegations of covering up for sexual abuse Sinn Fein has steadily increased its stock in opinion polls.

President John F. Kennedy’s funeral took place on 25 November. While the Irish cadets were in Washington at the Kennedy graveside, a national day of mourning was declared in Ireland. Businesses, shops and schools were closed, and religious services took place across Ireland.

In Dublin, the main service took place in the Pro-Cathedral. Among the mourners were Bean Sinead De Valera, the Taoiseach Seán Lemass, Jack Lynch, and Col. Sean Brennan, Aide-de-Camp. A US flag was flown at half-mast outside the Pro-Cathedral as a mark of respect.

A video from the RTÉ archive shows that it was not just the Catholic majority of the Irish society that participated in the mourning, but all sections of society. The video shows people filing into the Irish Hebrew Centre for a memorial service there.

Afterwards, the Kennedy homestead became a museum dedicated to Kennedy’s visit and the Kennedy family. A memorial park was set up in New Ross, and a bust was unveiled in US Embassy by Ted Sorensen, Kennedy’s speechwriter, and his wife, Sara Elbery, then just newly married. It was Sorensen that worked with Kennedy on the landmark speech he gave to both Houses of the Oireachtas during his visit in June 1963.

When Kennedy visited Ireland in June of 1963, he laid a wreath at Arbour Hill, the memorial dedicated to the executed 1916 leaders. As part of the ceremony, the 36th Cadet Class under Lt Frank Colclough performed the Queen Anne Drill, or the Funeral Drill, intended to honour the dead.

Kennedy seemed spellbound while the drill was going one, and later commentated on their performance. Later, when back in the US and reminiscing about the trip, he said his highlight was the ceremony at Arbour Hill and that “those cadets were terrific”. He asked for a film of the drill be made, so that it could be performed by the US ceremonial guards at the Tomb of the Unknown Soldier.

Kennedy’s assassination a couple of months later brought the cadets into focus again much sooner than anyone had expected. During the preparations for his funeral, Jackie rang De Valera to request that the cadets perform the drill once more. De Valera immediately swung into action to mobilise the troop, who were actually on leave at the time. They were brought out of dancehalls and back from the cinema but within 48 hours, 26 of the cadets were on their way to Washington, their Lee Enfield rifles under their seat on the airplane.

On their arrival, the cadets were shocked to discover that they would be placed right beside the coffin for the performance of the drill. You will see in the remastered video footage below just how much space was dedicated to the cadets, and the respect they were given while performing their drill.

The cadets, many of whom were still teenagers, performed the drill perfectly, despite knowing that the eyes of the world were upon them. It was the first, and only time, a foreign army has performed at a US president’s funeral, and it was perhaps the best send-off Ireland could give to her American son.

President John F. Kennedy was assassinated at 12:30 p.m. Central Standard Time (18:30 UTC) on Friday, November 22, 1963, in Dealey Plaza, Dallas, Texas. The moment he was shot was caught on grainy 8mm film camera by an onlooker called Abraham Zapruder. This footage, lasting only 26 seconds, is perhaps one of the most famous pieces of footage from the twentieth century.

Kennedy was on tour in Texas, and the motorcade through Dallas was scheduled to give him maximum exposure to the people. He was accompanied by Jackie, who sat beside him in the back seat.

Kennedy was hit first in the back, and slumped forward. The sound of the shot could be heard, but many people mistook it as a car backfiring. A second shot hit Governor John Connally, sitting in front of the Kennedys, in the chest. Kennedy was then shot again in the head. There was no confusion any more over what was happening and the President’s car raced to the Parkland Memorial Hospital. He was declared dead at 1:00 p.m.

The shots that hit Kennedy were fired from the sixth floor of the Texas School Book Depository. Lee Harvey Oswald a part-time worker at the Depository, was arrested at about 1:40pm in a cinema. His behavior had aroused suspicion from the public, and the ticket clerk rang the police to report him. Oswald had been stopped on the street earlier by Officer J.D. Tippit on the basis of a description that had been broadcast by the police. However, Oswald shot Tippit dead before he could arrest him.

Oswald himself was shot dead by Jack Ruby as he was being escorted from the back of a police station to be remanded in prison. Both men claimed to be acting alone, but numerous conspiracy theories have arisen since the assassination, blaming everybody from the CIA to Jackie Kennedy.

News of the assassination was beamed around the world almost instantly, thanks to advances in television and communications technology. Kennedy was the first US President to embrace television as a communications tool, famously winning the presidential debate with Nixon because of his youthful appearance on TV compared to Nixon, who had opted for no makeup and was sweating heavily.

The fact that both his murder, and the murder of his assassin, were also recorded on film, signified the arrival of the age of visual communication technology. It also brought an end to the ability of the public to get that close to a US president. No other president, or presidential candidate, would ever dream of travelling in an open-top motorcade again.
at 09:00 No comments:

The last Spitfire to be used by the Irish Air Corp took its last flight in May, 1961. The Spitfire TR9 '163' was in use from 1951 as a training aircraft, having being purchased from the British as they decommissioned them in favour of jet engine craft.

The Spitfires were synonymous with World World II, and caught the imagination of people for their feats in the Battle of Britain and other aerial dogfights with the Axis forces. Many films were made featuring the Spitfire, and Roald Dahl wrote a great book  called Going Solo about his time as a fighter pilot, and how they used to patch up the bullet holes with tin before taking to the air again.

One of the best known Spitfire “aces” was in fact an Irishman, Paddy Finucane, who shot down five German planes only to be killed himself over France in 1941. Six Victorian Crosses were awarded to Irishmen, who had fought with the British, for their efforts during the war. Five of those men were from southern Ireland, and may have come home from all the horror they’d witnessed to face hostility for signing up with the British.

After the war, industrial and technical advances meant that jet engines were the new system for flight technology. It was more efficient and more powerful, allowing a plane to fly further without needing to refuel. But the Spitfires were still sufficient for the Irish Air Corps for getting their cadet pilots into the air and gaining experience.

Although the Spitfire TR9 '163' was retired from flying in 1961, it was still used for ground training for another seven years, until it was sold to a private collector, Tony Samuelson of Spitfire Productions Ltd. If you’d like to find out more about the life of the TR9 ‘163’, you’ll find more here.
at 16:18 No comments: