The 1954 final was memorable for a number of reasons. Not only did it bring two of the game’s greats, Christy Ring and Nicky Rackard, into opposition of each other, it also took place in front of the largest crowd ever recorded at that point – 84,856. I believe that record still stands to this day. 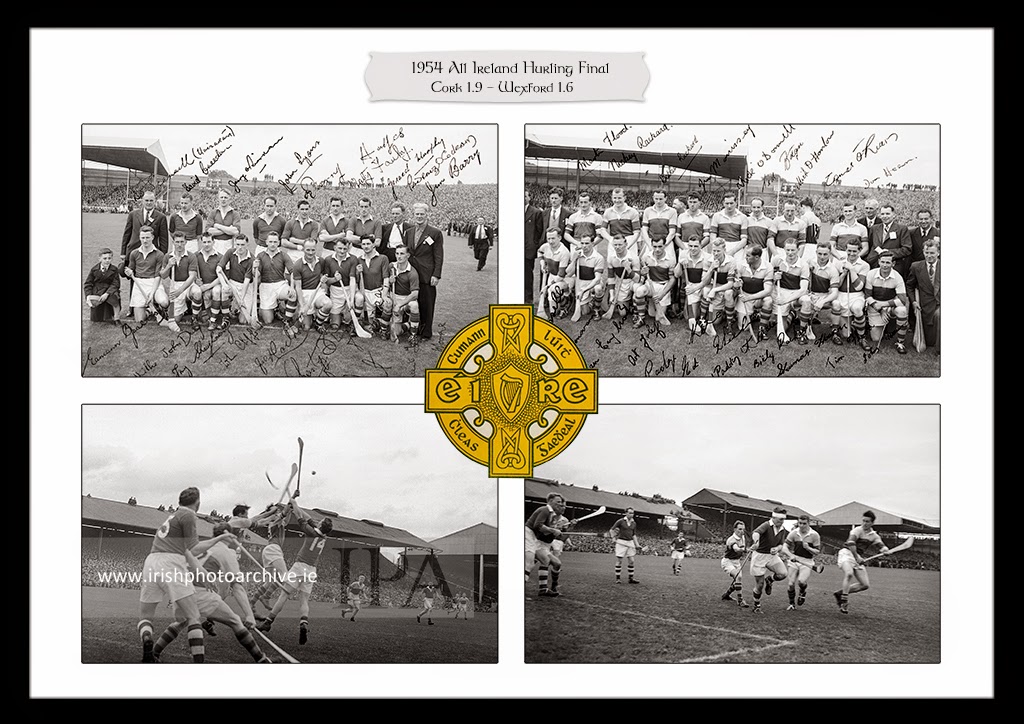 It was also a memorable occasion on a personal level for Christy Ring, who became the first player to win eight All-Irelands, and the third player to captain three champion sides. 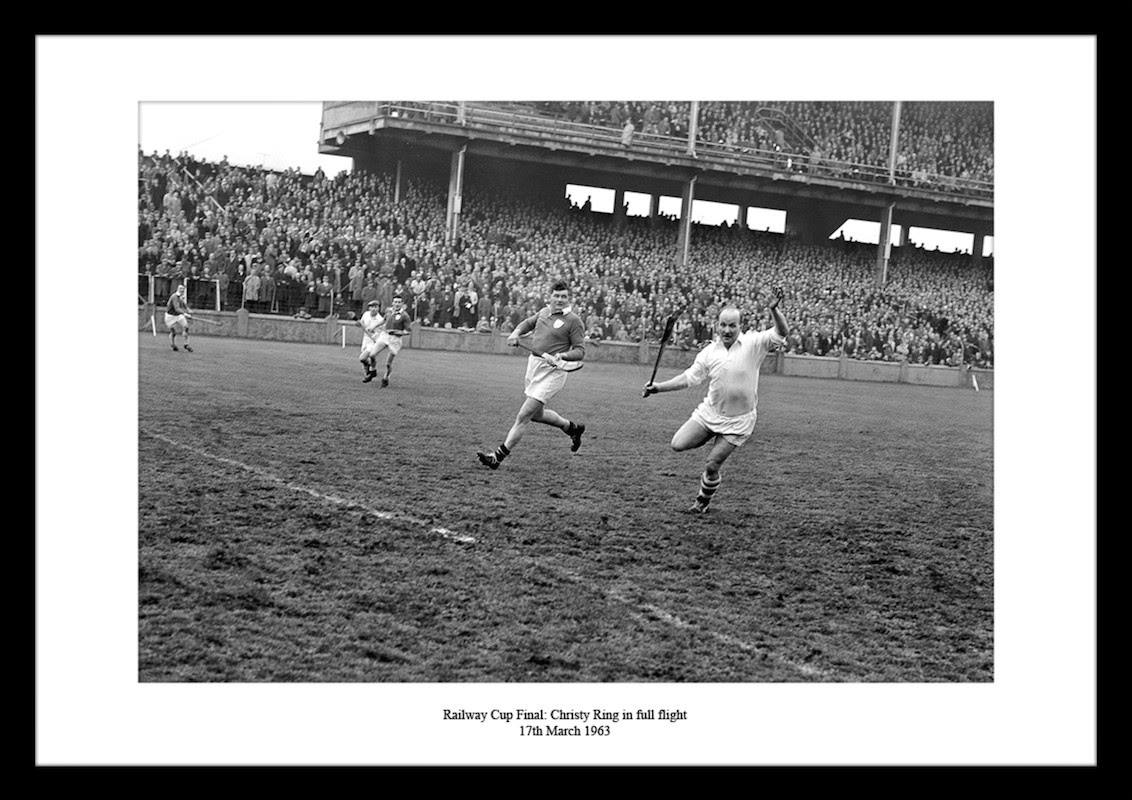 Although Wexford lag behind Cork in terms of numbers of All-Ireland titles, they truly dominated hurling in the 1950s. They lost to Cork in 1954 by 1-9 to 1-6, but had been seriously hampered by the loss of their full-back, Nick O’Donnell, to injury. When their defense was rearranged to cover for this loss, Cork were able to take full advantage of this and grab the win.

It was Wexford that took the McCarthy cup home the next two years, including gaining a sweet revenge on Cork in 1956, Their rivalry was a clean respectful battle though, evidenced by the Wexford team carrying Christy Ring off the field shoulder-high after defeating Cork in ’56.

This period was also the heyday of Nicky Rackard’s career, as he retired from inter-county hurling after Wexford lost to Kilkenny in 1957. Rackard is recognised as one of the sport’s greatest players, and remains one of the top ten most prolific goal-scorers of all time. 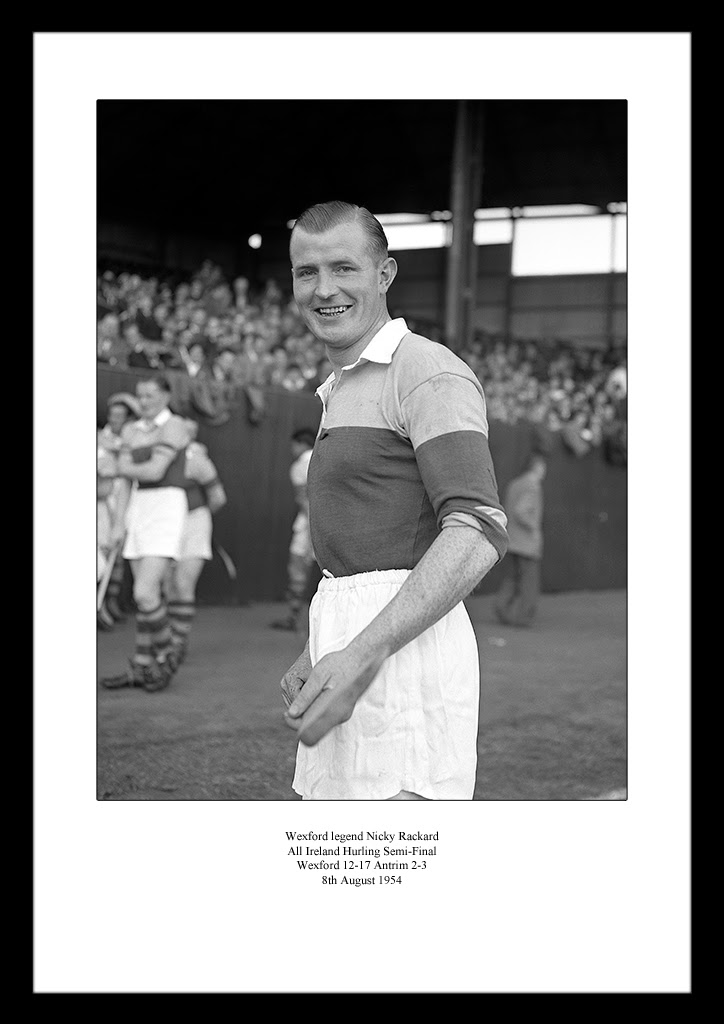 An almshouse for widows was built in Limerick in 1605, shortly after the famous siege of the city. It was part of charitable efforts to take care of the city’s vulnerable citizen, which also included building schools and orphanages.

The almshouse was still in operation in 1962, housing 22 widows. By that time, the building had fallen into disrepair; it was damp, suffering from dry rot, and had no light or running water. The widows had to use oil lamps and collect water from an outside pump, despite their age – the oldest resident was 93 years old.

After a bitter winter in 1961/62, a local publican called Michael Crowe set up the Widow’s Light Fund Committee to raise money to finance the installation of electricity in the almshouse. Installation would cost £120, and Mr Crowe encouraged his punters to pay an extra penny on the cost of their pint towards the fund.

Crowe’s customers were only too happy to oblige, and word soon spread about the fund. Money began to pour in from across the country, and soon £150 was raised. This was more than enough for the installation of the electricity but that was no problem for Crowe – he arranged to take the widows out for dinner with the leftover money.

On the morning that the electricity was installed in the almshouse, the widows were all whisked away to dinner at the restaurant at Shannon airport. None of the widows had seen the airport building, and many hadn’t even left their street since they had moved into the almshouse.

After the dinner, there was a dance at the airport and the widows were in demand as dance partners, especially 93-year-old Bridget Riordan. When they returned home afterwards, they found the almshouse blazing with light. The ESB technicians had slaved all day to get the lights installed before the widows came home.

Bridget Riordan told the Limerick Leader that while she was delighted with the electric light, she would keep her oil lamp “just in case”. A wise woman!

If you want to find out more about the almshouse, Limerick Council archives have a wealth of resources online here.

Gael Linn was an organization set up in the 1950s to try and revitalize the Irish language. It started by raising funds through a lottery system based on results from the Gaelic Games, which it used to create films, radio programmes and magazines.

Gael Linn also became involved in improving the economic development of Gaeltacht areas. Gaelic speakers consistently ranked lower than average in terms of income, and the Gaeltacht areas suffered greatly from the impact of emigration.

As part of this regeneration of the Gaeltacht, Gael Linn set up a fish and vegetable processing plant in Carna, Co. Galway. They also provided five fishing boats on a purchase-lease scheme to local fisherman, and invested in oyster beds to supply the factory.

Tomas O Bruadair, an inspector from the Department of Agriculture, was on hand to give advice on crops and soil preparation, while steel lobster pots were given to some farmers to replace their traditional wooden traps.

Since this series of photographs were uploaded to the Irish Photo Archive website, we have had a lot of feedback from people that know the area and the families. But if you see anything in the captions that still needs to be corrected, feel free to get in touch on irishphotoarchive@gmail.com and let us know.

The Dublin Fruit Market is a hidden gem in the back streets behind the Four Courts building. It was purpose built in 1893, and still operates to this day. It is a wholesale fruit site, supplying restaurants and small grocers/shops, but plans are underway to develop part of the building to accommodate small traders and artisan cafes.

The building is a fine example of Victorian architecture, with ornate facades masking the interior steel structure. A sharp-eyes passerby will notice decorations signaling the goods traded within: carrots, fruit, fish. Statues over the colonnaded front entrance were designed by Charles Harrison.

The redevelopment of the site is part of the overall regeneration of the markets area. Smithfield Square has already been overhauled to great success, and the city council’s intention is to bring people and businesses back to the empty buildings that remain between Smithfield and Abbey Street.

But back in 1959, when this series of photographs were taken by the Lensmen photographers, the market was still an essential part of a city centre Dubliner’s life. These photographs show the traders, the customers and the produce being bartered over on the morning of 3 February 1959.