One of the Irish Photo Archive's most popular images is this photograph of BenBulben, with a farmer working his field with his horse framed against the mountain. And it was a photograph that was only taken by taken by chance.

The photograph was taken by Andy Farren, one of the founding members of Lensmen Photographic Agency. He was on his way either to or from WB Yeats’ grave at Drumcliffe Church, which lies within the shadow of Ben Bulben. Perhaps it was Yeats’ verse that inspired the photograph:

“Under bare Ben Bulben’s head
In Drumcliff churchyard Yeats is laid.
An ancestor was rector there
Long years ago, a church stands near,
By the road an ancient cross.
No marble, no conventional phrase;
On limestone quarried near the spot
By his command these words are cut:
Cast a cold eye
On life, on death.
Horseman, pass by.”

The image has been posted on our social media sites and shared numerous times. But it was thanks to the traditional media that we found out the identity of the farmer in the photograph. It was used by the Sligo Champion to illustrate a piece in their newspaper, and the farmer’s family recognized their father and grandfather. His name is Tom Stewart, Munninane, Grange, Co. Sligo, and it was his granddaughter Emer Woods that got in touch with the Archive to let us know.

This photograph was in the same box as the photographs from the Ballinasloe Horse Fair, which also include some fabulous shots. If you want to find out more about those photographs, check out our previous blog entry, GoWest to Find a Horse.

We love to hear comments from people about our photographs, especially if you can correct the information we have, or provide names or extra details on the people or places featured. The documentation behind the Archive is extensive but many details of the ordinary people were not recorded. So if you also see somebody you recognize, please get in touch on irishphotoarchive@gmail.com.
at 09:00 No comments:

John Murphy was elected to the Dáil for Dublin South Central in the general election in 1957. He became the first unemployed person to get elected to parliament, and vowed to push the government to address the unemployment crisis that was driving many people abroad to find work at the time.

Although considered an independent because he was not part of any of the main parties, Murphy represented the Unemployment Protest Committee (UPC), which had been formed in January 1957. The UPC would organize protest marches through Dublin city centre, carrying a symbolic black coffin. They would hold rallies outside Werburg Street labour exchange, the largest labour exchange in Dublin, and distribute leaflets at the nearby Gardiner Street labour exchange.

Murphy encountered a lot of opposition from the moment he set foot in the Dáil chambers. He was looked down on by the established professional politicians, and struggled to get any answers to his queries from the relevant ministers. When the 1957 budget withdrew food subsidies and failed to provide for any employment stimulation schemes, Murphy and three other UPC members went on hunger strike. Their strike lasted for four days, and ended when the government agreed to place price controls on bread.

During the hunger strike, Murphy had hoped to gain support from Archbishop John Charles McQuaid, only to be disappointed when McQuaid eventually denounced the unemployment movement. Murphy faced further pressure when friction grew within the UPC. It had originally been created as a single issue party, which Murphy still believed in, but other members began to advocate widening the party’s remit.

Murphy resigned his seat in May 1958, finding it impossible to make any headway against the indifference of the mainstream politicians. Of his time as an elected public representative, Murphy said: “I found that Leinster House was more a centre of political activity and useless talk than a place where plans could be made to ease the lot of the unfortunate.”

Ironically, Murphy’s tenure in the Dáil meant he had lost his unemployment stamps, and his unemployment support was drastically reduced. The family was forced to emigrate to Canada for a few years, returning in 1964. Murphy died in 1984, at the age of 64, having only retired two years’ earlier due to the onset of ill health.

It is Muhammad Ali’s birthday today, making him officially ‘in his seventies’. Reaching this birthday is in itself a huge achievement for Ali. He was officially diagnosed with Parkinson’s 30 years ago, in 1984. The average life expectancy after diagnosis is 16 years, but Ali’s fighting spirit has no doubt contributed to his longevity.

There have been a lot of health scares concerning Ali lately. He was hospitalized briefly early this year with pneumonia, and his brother, Rahman, had declared him to be on the brink of death in February 2013, but this was disputed by other members of Ali’s family.

Ali first started showing symptoms of Parkinson’s in 1979, displaying trembling hands and vocal stutterings. He was declared fit to fight by the Mayo Clinic, and continued to do so into the eighties, despite those closest to him begging him to stop. It is believed that those last fights aggravated his condition.

Ali is still named as one of the best heavyweight champion of all times. He was the first to win the title three times, and achieved this during what was known as the golden era of heavyweight boxing, contending with the likes of Joe Frazier, George Foreman and Sonny Liston. He also won an Olympic gold medal before going professional, though he claimed to have thrown his medal away after being refused service in an all-white restaurant.

What made Ali stand out the most from his contemporaries was his light-footedness. He was never an overpowering puncher, but his speed meant he could dodge heavy punches and counteract with some jabs of his own. His flurries of lighter jabs would wear out many of his more powerful opponents, and his ability to absorb their punches meant he could outlast them. 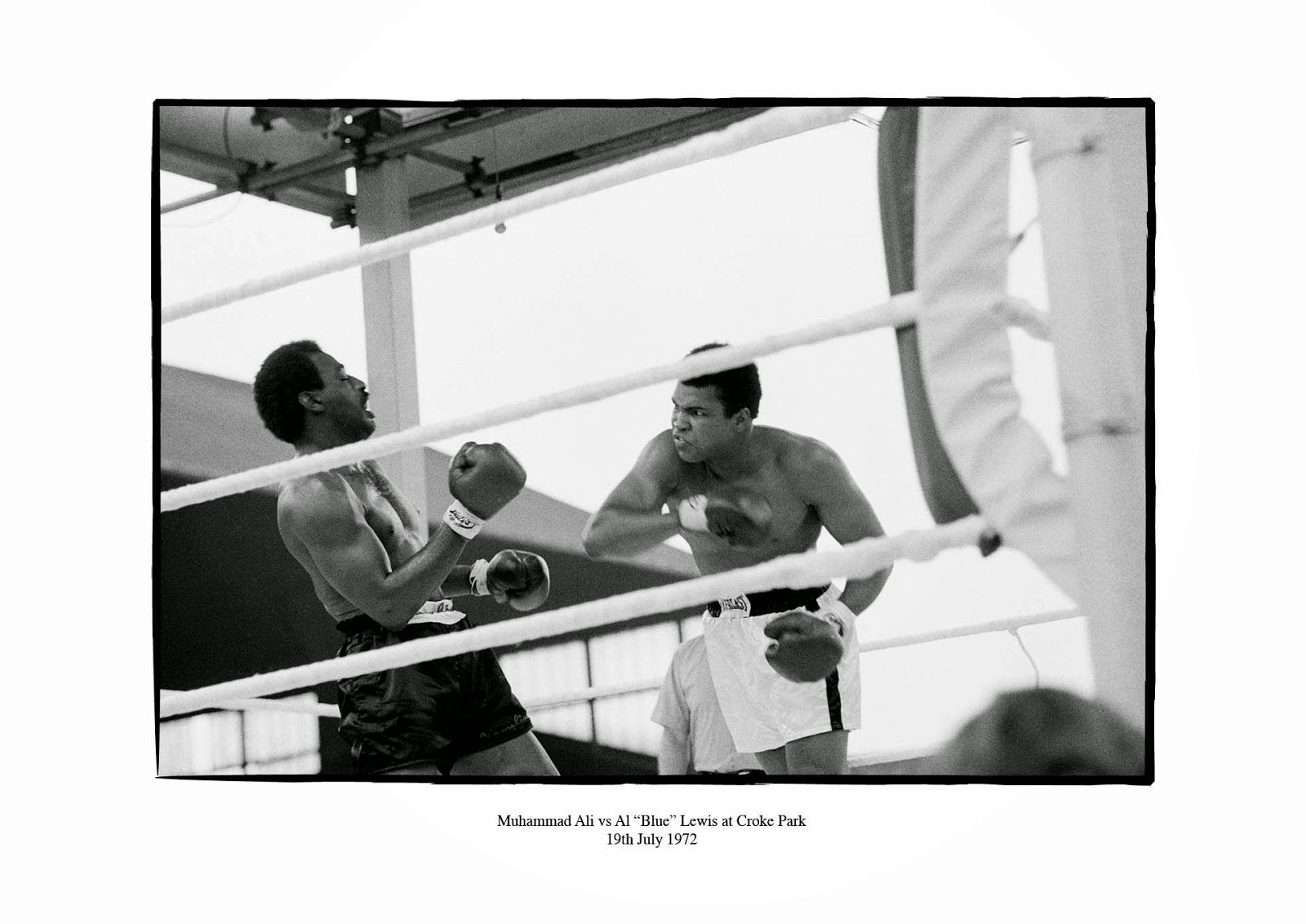 When Ali faced Al ‘Blue’ Lewis in Dublin in 1972, he was preparing for another shot at the championship title. He had lost to Joe Frazier in 1971, the then reigning heavyweight champion. However, Ali had been inactive for almost four years before that fight when he was stripped of his title and his boxing licence was removed after he refused to be drafted for the Vietnam War.

Very few people wanted to fight Lewis, as he was known as a heavy hitter. Ali had a lot of respect for him, and cited him as one of the top five fighters he had ever faced.

While Ali was in Ireland, he visited Stewart’s Hospital in Portmarnock and spent a lot of time greeting people on the streets. He also sat down with the Taoiseach, Jack Lynch, and conducted a brilliantly candid interview with Cathal O’Shannon on RTÉ. It was not just his prowess in the ring that endeared Ali to the public, his showmanship, his exuberant confidence and his natural empathy for the downtrodden that made him one of the most recognized sports people in the world.

Today, one week after twelve people were killed in an attack on its offices in Paris, the French satirical magazine, Charlie Hebdo, was back on the streets.

Around 5 million copies of the magazine hit the streets in 16 different languages. In Paris would be buyers were queuing for hours to get a copy which is likely to become a collector's item.

Emerald Star are well known in Ireland for providing rental cruisers for people wanting to holiday along the Shannon. From their base in Carrick-on-Shannon, they have gone on to conquer the cruise liner market not just in Ireland, but also in the UK and across Europe.

In 1987, new customer service facilities were launched at Emerald Star’s base in Carrick. Some of the VIPs hosted at the launch by Mr Bodell, Chairman of Emerald Star, included: John Wilson, TD; Brian Slowey, MD of Guinness; and Michael McDonnell from the Department of Tourism.

Carrick-on-Shannon had always been an important port for Guinness, as it connected the canal network with the Shannon, and the west of Ireland. Bodell was also a trustee of the Iveagh Trust, and operated as its chairman from 1999-2003, so there were strong connections between the two companies for a long time.

Another important player on the Leitrim industrial scene was General Plastics. The establishment of the factory was part of the IDA push to encourage firms from overseas to set up branches in Ireland, taking advantage of our proximity to the European market and readily available labour force. The Carrick-on-Shannon factory manufactured electrical products that were encased in moulded plastic, such as the hairdryers shown in this photograph.

But the river was always the life source for Carrick. The town was built at a strategic crossing point of the Shannon, which meant it became an important trading point. The river provided employment, food and leisure, as the longevity and prowess of the Carrick-on-Shannon Rowing Club, founded in 1854.