After ten days of national mourning South Africa finally laid to rest its first post apartheid black president, Nelson Mandela. The ceremony took place in the town of Qunu and 'in keeping with tradition, Mandela was laid to rest in the afternoon, when the sun is at its highest.'

Amongst the mourners from Ireland was the President of Sinn Fein, Gerry Adams.


Workers who protested against the handling of South African produce during the Apartheid campaign were in South Africa for a funeral service for the late Nelson Mandela.


All 11 of the former Dunnes Stores workers, whose strike of almost three years moved the Irish government to ban South African produce in the 1980s were in attendance … Their strike was one of the longest in trade union history in Ireland and only ended when the government agreed to ban the import of South African fruit and vegetables until the apartheid regime was over.

Democratic South Africa is in the midst of ten days of mourning for its first president Nelson Mandela. The former Robben Island prisoner will be buried in the village of Qunu in the Eastern Cape, where he was born.

The late Nelson Mandela who is to be buried near Soweto tomorrow emerged, during his days as a political prisoner in Robben Island, as the public face of a global anti-Apartheid campaign.

In Ireland the Irish Anti-Apartheid Movement was founded by Kadar Asmal who later served under Nelson Mandela in the government of South Africa.

Nelson Mandela, the first black president of South Africa who died on Thursday, once spoke in the Irish parliament. He arrived in Ireland in July 1990 not long after he had been released from Robben Island where he had served 27 years a political prisoner of the white minority Apartheid regime.

Mr Mandela died at 95 years of age. His health had been frail for some time.

The publication of the Smithwick Report's findings in respect of the deaths of two RUC officers in 1989 at the hands of the IRA has led to a storm of acrimony. Sinn Fein leader Gerry Adams has come in for much criticism for his comments on Newstalk. Opponents have accused him of virtually having blamed both men for their own deaths.

The RUC men, both unarmed, died shortly afer crossing a border on their return from a meeting with with counterparts in An Garda Siochana at Dundalk Garda station. The Smithwick Report has concluded that on the balance of probability collusion between a Garda mole and the IRA led to the killings.

Breen and Buchanan were the two most high ranking police officers to have died during the North's conflict which produced over 3000 deaths. The term 'collusion' is normally reserved to describe aspects of the relationship between British state security forces and loyalist detah squads. One notable case was the solicitor Pat Finucnae who died after collusion between his UDA killers and senior members of the RUC.

Despite Smithwick concluding that there was an element of Garda collusion, the Garda Siochana paid a heavy price as a consequence of the Northern conflict. A number of garda lost their lives in shooting and gun attacks carried out by armed republivan groups. In 1975, for example, Garda Michael Reynolds was gunned down as he sought to pursue people in the immediate wake of an armed robbery. 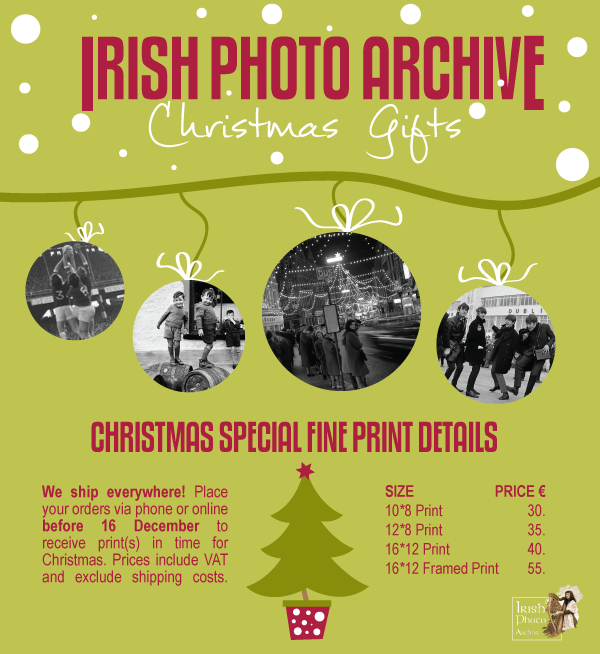 We have the perfect gift for those interested in Irish history or with a passion for quality photography at the Irish Photo Archive. For over six decades, the Archive has captured the essence of Irish life with stunning and thought-provoking photography. Dating back to the early 50s, these unique and distinct photographs tell the story of Irish life across the counties at the end of the 20th Century and capture past significant social, cultural, political and sporting milestones.

We have over three million negatives, 50,000 of which are digitized and available on our website. Any of these images can be selected from our website and delivered on quality fine art grade print reproductions. We deliver framed or unframed prints on high quality paper with an embossed seal and certificate of authenticity at a reasonable cost.

Make sure to place your order before 16th December to receive your print(s) in time for Christmas.


Enjoy 10% off all purchases made before 10th January as a Christmas gift
from the Irish Photo Archive. Happy Christmas!

Pope Francis shows no sign of abating in his stated determination to introduce reform in the Catholic Church. In his encyclical "Evangelii Gaudium" the Argentinian pontiff described unfettered capitalism as "a new tyranny".


While this is is almost certain to set him on a collision course with the more conservative elements perhaps even more challenging to the power of tradition is his statement:

Tom Gilmartin the main witness at the Mahon Tribunal died at the weekend and has been buried in Donegal.


Thomas Gilmartin jnr last year told the Irish Times said that only for his father 'Ireland would never have found out about the corrupt activities of people like Frank Dunlop, nor the existence of a corruption ring at the heart of planning in Ireland.'

The investigations into planning corruption resulting in the Mahon Tribunal effectively brought down the curtain on the political career of leading politicians including Taoiseach Bertie Ahern.

Call for Line to be Drawn Under North's Past

The North's Attorney General, John Larkin,  in a hugely significant but controversial statement, has called for an end to prosecutions in respect of all 'Troubles' related offences.

The 'Troubles' would be defined as the era prior to the Good Friday Agreement of 1998 and resulted in thousands of deaths.

Apart from strenuous opposition mounted by victims' groups an additional problem is how any proposed policy change might effect the Republic. The biggest single 'spillover' atrocity from the Northern political violence was the Dublin Monaghan bombings of May 1974 when more than thirty civilians lost their lives.

Nobody had yet been made amenable and there are strong suspicions that British state security forces had some involvement in the attacks.

Remembering the life and legacy of President John F. Kennedy

On the 50th Anniversary of JFK’s assassination, the world remembers President John F. Kennedy and the legacy he left behind. To honour a great leader, the Archive have selected this touching photograph of the President during his Homecoming tour of Ireland in 1963. 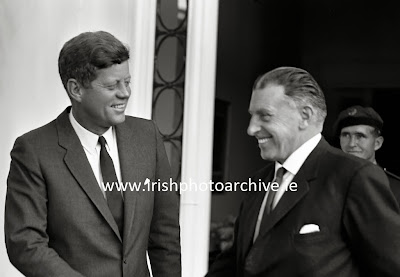 From the Whitehouse to Wexford: JFK’s visit to Ireland in 1963.

On the 27th June, 1963, JFK visited his ancestral hometown of Co. Wexford. This was a proud moment for Ireland and one that was much anticipated, particularly for the townspeople and JKF’s Irish relatives who were there to greet him.  In this photograph, Mrs Mary Ryan (neé J F. Kennedy) embraces President Kennedy and plants a kiss on his cheek, uttering the words, “Welcome home, Jack”. 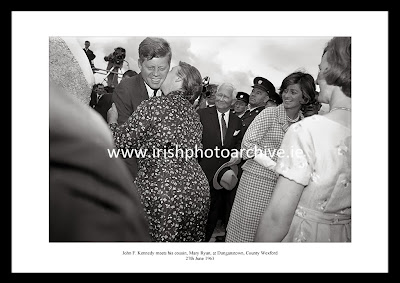 JFK’s cavalcade through the streets of Dublin...

On the 27th June 1963, John F. Kennedy made his way though the city streets of Dublin riding atop an open cavalcade. As he smiles and waves to the huge crowd who had gathered to meet him, JFK is showered with confetti as the onlookers welcome the president on his first visit to Ireland. 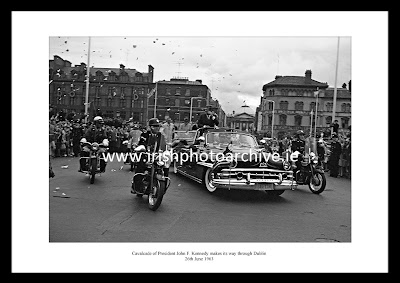 To mark the 50th Anniversary of John F. Kennedy’s tragic passing, the Irish Photo Archive have put together a series of remembrance prints that look back on his legendary visit to Ireland in 1963. Below is an especially framed photographic print from the collection, which captures the arrival ceremony at Dublin airport in June 1963. Here, JFK stands respectfully to attention as the flag is raised to meet him at the airport. 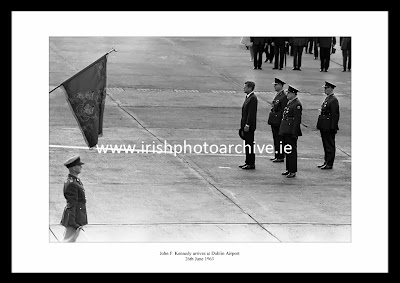